The constitutional bases for social protection: continuities and breaks

This article discusses the ways in which the Constitution of the Portuguese Republic has embodied to the political choices made during the process of creating and defining a democratic welfare state and how the various constitutional principles are reflected in the architecture of the system and have gradually changed over the years. The authors argue that when Portugal transitioned to democracy, unlike other areas of the country’s social policies the social security system retained some of its earlier organising principles. Having said this, this resilience on the part of the Portuguese system’s Bismarckian template has not prevented social protection from expanding here in accordance with universal principles, and has given successive governments manoeuvring room in which to define programmatically distinct policies and implement differentiated reformist strategies. The paper concludes by arguing that while the Constitution has not placed an insurmountable limit on governments’ political action, it has served as a point of veto, namely by means of the way in which the Constitutional Court has defended the right to social protection, be it in the form of social insurance, be it in the imposition of certain social minima. 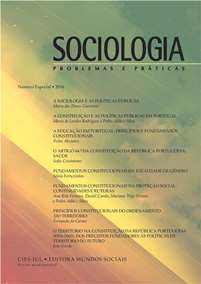