Contributions to the emergence of a sonic youth: the constitution of the noise scene of Caldas da Rainha

This article seeks to take a preliminary look at the first moments of the noise / experimental scene that took place in the city of Caldas da Rainha, from the turn of the 1980s to the 1990s, focusing on the artistic, musical and cultural activity of local bands - And the artist João Paulo Feliciano as protagonist. In this way, we try to identify the key points and factors that allowed the flourishing of a noise scene in Caldas da Rainha, such as disc stores, people, meeting places, publishers, events, live sessions, parties and so on. It was also our objective to highlight the initial impacts that the music and the artistic movements made in the city had on the rest of the country. At the same time, we present the points of influence that the effervescence of rock in Portugal had in Caldas da Rainha and in its noise / experimental scene, launching a previous analysis on the ramifications of the progress of the scene in the city that took local musicians, besides Feliciano, to The national scene. Thus, this article intends to make a propedeutic essay of the concept of scene to the dynamics developed in Caldas da Rainha, highlighting the need that certain actors felt for the creation of their own "ecosystem" by founding publishers, scheduling gigs and expanding the network and characters and Spaces - so necessary for independent scenes. Here, we will include the importance of contacts with musicians from other cities in Portugal and even the ties of friendship between Feliciano and Lee Ranaldo (Sonic Youth) and in what this helped to cancel the noise that was made in the city, more known by Tina And the Top Ten. 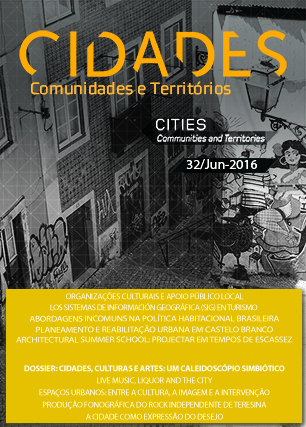