The economic dynamics in Sergipe, from the 70s, intensified migration to Aracaju and adjacent municipalities, causing a new urban setting, especially in the capital. Changes of this process directly impact the social development of the population and reflect on quality of life. Despite these changes, Aracaju has been considered, since 2005, as the capital of the quality of life. However, this qualification failed to consider some aspects related to social development, as well as the increase in irregular settlements known as slums. Thus, this study sought to calculate the Social Development Index - SDI for Aracaju, assessing the changes in the urban reality in the years 2000 and 2010, paralleling the spatial distribution of slums. The methodology adopted was based on the proposition of Cavallieri and Lopes (2008), using some dimensions to characterize the urban setting: access to sanitation, quality of housing, schooling, and disposable income, based on data by census tracts, available by censuses conducted by IBGE in 2000 and 2010. The results showed changes in the socio-spatial mesh of the city. These changes reflect that the impacts of urban growth is not always accompanied by the necessary supply of infrastructure, housing, and sanitary services within the census tracts that make up the Urban Expansion Area and outlying area west and north/northwest. On the other hand, results showed positive developments in sectors that make up the northeast, central, and north-central regions of the city. 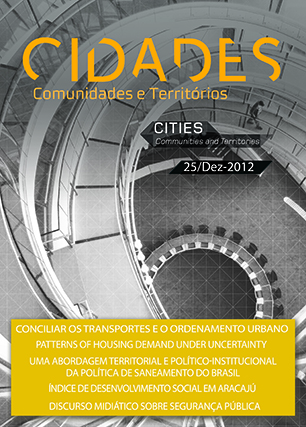