The aim of this article is to revisit the question of the social origins of the armed forces officer corps, using data drawn from a survey to all cadets following military training at the three Portuguese service academies in 2016. It puts forward the question of whether the sociological characteristics of the future military elite reveal a pattern of convergence with society or depart from it, in terms of geographical origins, gender and social origins. The article offers a sociological portrait of the cadets and compares it with previous studies, identifying trends of change and continuity. The results show that there is a diversified and convergent recruitment pattern: cadets are coming from a greater variety of regions in the country than in the past; there is a still an asymmetric but improving gender balance; self-recruitment patterns are rather stable, and there is a segmented social origin pointing to the dominance of the more qualified and affluent social classes. In the conclusion questions are raised regarding future civil-military convergence patterns as well as possible growing differences between ranks. 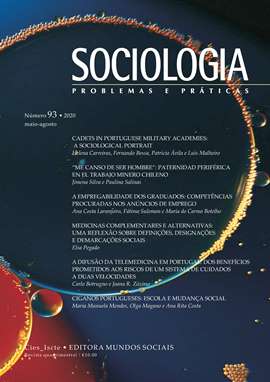