Beyond the cultural model

This article takes up the context of literature production on the characteristics that are most commonly associated with housing systems in Southern European countries, namely, the low weight of public housing supply, the large share of home ownership and a considerable number of second homes and vacant dwellings. This theme, highly debated in the first decade of the 20th century, questioned the significance of the Southern European countries, with lower income households, those which had (and still have) the highest percentages of home ownership. The sociological reflection developed on the relationship between the specificity of the Portuguese development model (and housing policies) and the high rate of property ownership aims to go beyond comparative research on Southern European countries, generally based on typologies that emphasize the causal relationship between property rates and the type of welfare regime. One of the objectives is to understand the structural factors of this situation. Throughout the text we point out four phenomena that have shaped the Portuguese housing system, with an impact on the property regime. Through them one can recognize that access to home ownership is not only a public intention and an economic pressure from the market, but is also anchored in the expectations of families, for whom housing assumes a complex political, economic and symbolic role. We argue that the articulation between these phenomena represents  a "happy joint venture" between Families, State and Market.

For families, this form of access to housing seems to function not only as an attachment to property, as part of a specific cultural model, as is usually a hallmark of Southern European countries, but also translates an economic rationale and a source of security, in a context of an unstable labour market, low income and weak social protection. 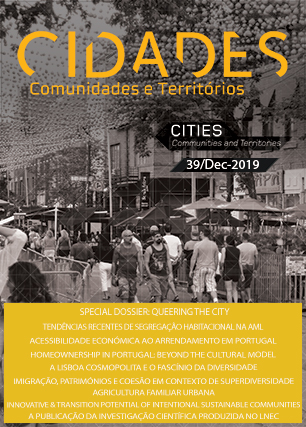