Attitudes in relation to the division of labour within the family in Portugal in 2002 and 2014: changes and continuities

This article seeks to analyse how attitudes towards the couple division of labour in Portugal evolved between 2002 and 2014. One of its primary goals is to gauge the extent to which that evolution represents a modernisation of attitudes. It also assesses the probability that the evolution constituted a complexification of attitude patterns, or alternatively a crystallisation around dichotomic ones. To this end the authors performed a comparative analysis of the Portuguese attitudes reported in the ISSP (International Social Survey) Family and Gender modules for two distinct periods – 2002 and 2014. They then suggest some factors that may explain the patterns that were observed. However, while the attitude patterns found in 2002 had unequivocally evolved by 2014, it is also clear that there is a certain incongruence in Portuguese attitudes towards reconciling work and family, especially when there are small children. These and other results are analysed in the light of both the specificities of the Portuguese socioeconomic context during the period under analysis and the contributions made by some recent research on gender-related questions in the attitudes of Portuguese people. 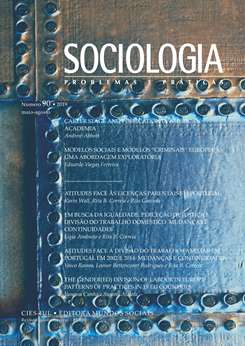